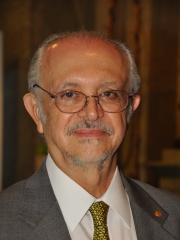 Mario José Molina-Pasquel Henríquez (19 March 1943 – 7 October 2020), known as Mario Molina, was a Mexican chemist. He played a pivotal role in the discovery of the Antarctic ozone hole, and was a co-recipient of the 1995 Nobel Prize in Chemistry for his role in discovering the threat to the Earth's ozone layer from chlorofluorocarbon (CFC) gases. He was the first Mexican-born scientist to receive a Nobel Prize in Chemistry and the third Mexican born person to receive the Nobel award.In his career, Molina held research and teaching positions at University of California, Irvine, California Institute of Technology, Massachusetts Institute of Technology, University of California, San Diego, and the Center for Atmospheric Sciences at the Scripps Institution of Oceanography. Read more on Wikipedia

Among CHEMISTS In Mexico