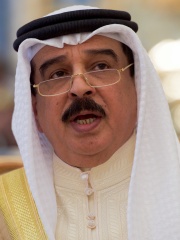 Hamad bin Isa bin Salman al-Khalifa (Arabic: حمد بن عيسى بن سلمان آل خليفة‎ Ḥamad bin ʿĪsā bin Salmān ʾĀl Ḫalīfah; born 28 January 1950) is the King of Bahrain. He has been the monarch of Bahrain since 6 March 1999, initially reigning as emir, and from 14 February 2002, as the first king. He is the son of Isa bin Salman Al Khalifa, the previous and first emir. Read more on Wikipedia

Since 2007, the English Wikipedia page of Hamad bin Isa Al Khalifa has received more than 935,913 page views. His biography is available in 55 different languages on Wikipedia making him the 2,837th most popular politician.

Among politicians, Hamad bin Isa Al Khalifa ranks 2,819 out of 14,801. Before him are Frederick II, Duke of Austria, Basarab I of Wallachia, Charles VII of Sweden, Qi of Xia, Emperor Go-Kashiwabara, and Lee Teng-hui. After him are Artavasdes II of Armenia, Liu Bian, Yitzhak Navon, William Pitt the Younger, Seleucus IV Philopator, and Gustav Heinemann.

Others born in Bahrain

Among POLITICIANS In Bahrain