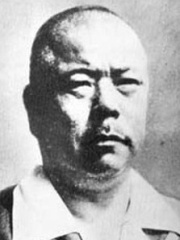 Tomoyuki Yamashita (山下 奉文, Yamashita Tomoyuki, 8 November 1885 – 23 February 1946; also called Tomobumi Yamashita) was a Japanese officer and convicted war criminal, who was a general in the Imperial Japanese Army during World War II. Yamashita led Japanese forces during the invasion of Malaya and Battle of Singapore, with his accomplishment of conquering Malaya and Singapore in 70 days earning him the sobriquet "The Tiger of Malaya" and led to the British Prime Minister Winston Churchill calling the ignominious fall of Singapore to Japan the "worst disaster" and "largest capitulation" in British military history. Yamashita was assigned to defend the Philippines from the advancing Allied forces later in the war, and while unable to prevent the Allied advance, he was able to hold on to part of Luzon until after the formal Surrender of Japan in August 1945. After the war, Yamashita was tried for war crimes committed by troops under his command during the Japanese defense of the occupied Philippines in 1944. Read more on Wikipedia

Tomoyuki Yamashita was a Japanese general who was in charge of the Japanese Imperial Army during World War II. He is most famous for his involvement in the war and his occupation of the Philippines.