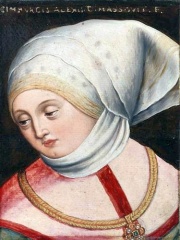 Cymburgis of Masovia (German: Cimburgis von Masowien), also Zimburgis or Cimburga (Polish: Cymbarka mazowiecka; 1394 or 1397 – 28 September 1429), a member of the Polish Piast dynasty, was Duchess of Austria from 1412 until 1424, by her marriage with the Habsburg duke Ernest the Iron. Read more on Wikipedia

Since 2007, the English Wikipedia page of Cymburgis of Masovia has received more than 58,850 page views. Her biography is available in 20 different languages on Wikipedia making her the 173rd most popular nobleman.

Among noblemen, Cymburgis of Masovia ranks 191 out of 559. Before her are Arsinoe I, Claude, Duke of Guise, Julia, Princess of Battenberg, Princess Deokhye, Adolf, Duke of Holstein-Gottorp, and Antoine, Duke of Montpensier. After her are Madeleine of Valois, Stéphanie de Beauharnais, Landgravine Elisabeth Amalie of Hesse-Darmstadt, Liliʻuokalani, Prince Albert Victor, Duke of Clarence and Avondale, and Arthur I, Duke of Brittany.

Among noblemen born in Poland, Cymburgis of Masovia ranks 3. Before her are Catherine the Great (1762) and Julia, Princess of Battenberg (1825). After her are Duchess Maria Dorothea of Württemberg (1797), Peter I, Grand Duke of Oldenburg (1755), and Richeza of Poland, Queen of Castile (1140).