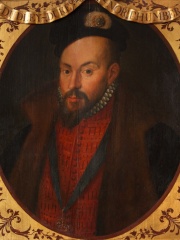 John Dudley, 1st Duke of Northumberland (1504 – 22 August 1553) was an English general, admiral, and politician, who led the government of the young King Edward VI from 1550 until 1553, and unsuccessfully tried to install Lady Jane Grey on the English throne after the King's death. The son of Edmund Dudley, a minister of Henry VII executed by Henry VIII, John Dudley became the ward of Sir Edward Guildford at the age of seven. Dudley grew up in Guildford's household together with his future wife, Guildford's daughter Jane, with whom he was to have 13 children. Read more on Wikipedia

Among politicians, John Dudley, 1st Duke of Northumberland ranks 5,359 out of 15,577. Before him are Emperor Go-Toba, Helena of Moscow, Zhao Mengfu, Wilfried Martens, Psammuthes, and Vyacheslav Menzhinsky. After him are Arsames, Antti Aarne, Hüma Hatun, Emperor Kōbun, Clement Greenberg, and Erwig.