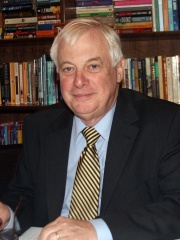 Christopher Francis Patten, Baron Patten of Barnes, (Chinese: 彭定康; born 12 May 1944) is a British politician who was the 28th and last Governor of Hong Kong from 1992 to 1997 and Chairman of the Conservative Party from 1990 to 1992. He was made a life peer in 2005 and has been Chancellor of the University of Oxford since 2003. Raised in west London, Patten studied history at Balliol College, Oxford. Read more on Wikipedia

Among politicians, Chris Patten ranks 6,292 out of 15,710. Before him are Grimoald, King of the Lombards, Zhu Yujian, Zhang Jinghui, Ce Acatl Topiltzin, Sidi Ould Cheikh Abdallahi, and Sulayman ibn al-Hakam. After him are Margaret of Hungary, Aleida March, Ceawlin of Wessex, Bernard I, Duke of Saxony, Katharine, Duchess of Kent, and Ulrich von Hassell.