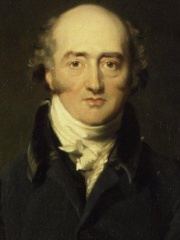 George Canning (11 April 1770 – 8 August 1827) was a British Tory statesman. He held various senior cabinet positions under numerous prime ministers, including two important terms as Foreign Secretary, finally becoming Prime Minister of the United Kingdom for the last 119 days of his life, from April to August 1827. The son of an actress and a failed businessman and lawyer, Canning was supported financially by his uncle, Stratford Canning, which allowed him to attend Eton College and Christ Church, Oxford. Read more on Wikipedia

Among politicians, George Canning ranks 5,436 out of 15,577. Before him are George Boleyn, 2nd Viscount Rochford, Gyula Horn, Solamish, Philip I, Count of Flanders, Nicomedes I of Bithynia, and Domitianus II. After him are Vikramaditya, Anytus, Anna Amalia, Abbess of Quedlinburg, Ida Haendel, Boris Pugo, and Canute II of Sweden.