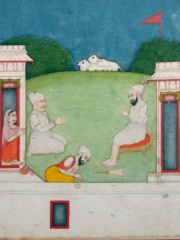 Guru Angad (31 March 1504 – 29 March 1552; Gurmukhi: ਗੁਰੂ ਅੰਗਦ, pronunciation: [gʊɾuː əŋgəd̯ᵊ]) was the second of the ten Sikh gurus of Sikhism. After meeting Guru Nanak, the founder of Sikhism, becoming a Sikh, and serving and working with Guru Nanak for many years, Guru Nanak gave Lehna the name Angad ("my own limb"), and chose Angad as the second Sikh Guru.After the death of Guru Nanak in 1539, Guru Angad led the Sikh tradition. He is remembered in Sikhism for adopting and formalising the Gurmukhi alphabet. Read more on Wikipedia

Among people born in 1504, Guru Angad ranks 9. Before him are Philip I, Landgrave of Hesse, Francesco Primaticcio, Beatrice of Portugal, Duchess of Savoy, Heinrich Bullinger, John Dudley, 1st Duke of Northumberland, and George Boleyn, 2nd Viscount Rochford. After him are Scipione Rebiba, Louis of Granada, Charles Estienne, Antun Vrančić, Dorothea of Denmark, Duchess of Prussia, and Ğazı I Giray. Among people deceased in 1552, Guru Angad ranks 11. Before him are Paolo Giovio, Sebastian Münster, Edward Seymour, 1st Duke of Somerset, Andreas Osiander, Olaus Petri, and Antonio de Mendoza. After him are Pierre Attaingnant and Qiu Ying.