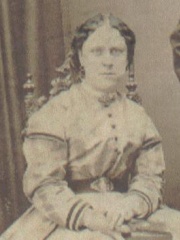 Annie Chapman (born Eliza Ann Smith; 25 September 1840 – 8 September 1888) was the second canonical victim of the notorious unidentified serial killer Jack the Ripper, who killed and mutilated a minimum of five women in the Whitechapel and Spitalfields districts of London from late August to early November 1888. Although previous murders linked to Jack the Ripper (then known as the "Whitechapel murderer") had received considerable press and public attention, the murder of Annie Chapman generated a state of panic in the East End of London, with police under increasing pressure to apprehend the culprit. Read more on Wikipedia

Among religious figures, Annie Chapman ranks 1,032 out of 2,238. Before her are Petar I Petrović-Njegoš, Rupert of Salzburg, Nicholas of Tolentino, Ahmad al-Badawi, Maria Celeste, and 6th Dalai Lama. After her are Antipope Philip, Antipope Gregory VI, Ikkyū, Patriarch Tikhon of Moscow, Urraca of Zamora, and Nahshon.