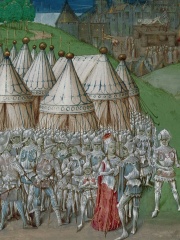 Roger Mortimer, 3rd Baron Mortimer of Wigmore, 1st Earl of March (25 April 1287 – 29 November 1330), was an English nobleman and powerful Marcher lord who gained many estates in the Welsh Marches and Ireland following his advantageous marriage to the wealthy heiress Joan de Geneville, 2nd Baroness Geneville. In November 1316, he was appointed Lord Lieutenant of Ireland. He was imprisoned in the Tower of London in 1322 for having led the Marcher lords in a revolt against King Edward II in what became known as the Despenser War. Read more on Wikipedia

Roger Mortimer, 1st Earl of March is most famous for being one of the leaders of the rebellion against King Edward II, and for being the lover of Queen Isabella.

Among people born in 1287, Roger Mortimer, 1st Earl of March ranks 1. After him are Robert III of Artois, William I, Count of Hainaut, Luchino Visconti, Richard de Bury, and Hugh Despenser the younger. Among people deceased in 1330, Roger Mortimer, 1st Earl of March ranks 7. Before him are Frederick the Fair, Joan II, Countess of Burgundy, Alaeddin Pasha, Pietro Cavallini, Elizabeth of Bohemia, and Michael Shishman of Bulgaria. After him are Ubertino of Casale, Isabella of Aragon, Queen of Germany, Alexios II of Trebizond, Yolande of Dreux, Queen of Scotland, and Euphemia of Pomerania.