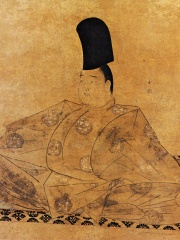 Emperor Go-Toba (後鳥羽天皇, Go-Toba-tennō, August 6, 1180 – March 28, 1239) was the 82nd emperor of Japan, according to the traditional order of succession. His reign spanned the years from 1183 through 1198.This 12th-century sovereign was named after Emperor Toba, and go- (後), translates literally as "later"; and thus, he is sometimes called the "Later Emperor Toba". Read more on Wikipedia

Among people born in 1180, Emperor Go-Toba ranks 5. Before him are Berengaria of Castile, Eric X of Sweden, Theodore Komnenos Doukas, and Gottfried von Strassburg. After him are Constance of Hungary, Neidhart von Reuental, Mstislav Mstislavich, Peter Nolasco, Alfonso II, Count of Provence, Otto I, Duke of Merania, and Bernhard von Spanheim. Among people deceased in 1239, Emperor Go-Toba ranks 2. Before him is Hermann von Salza. After him are Albert IV, Count of Habsburg and Władysław Odonic.