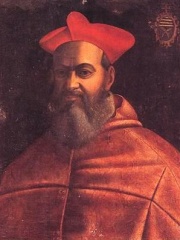 Scipione Rebiba (3 February 1504 – 23 July 1577) was an Italian prelate of the Catholic Church, a protégé of Gian Pietro Carafa, who became Pope Paul IV. He held a variety of positions in the Church hierarchy, including some of the most senior. He introduced the Inquisition to Naples in the 1550s and became a cardinal in 1555. Read more on Wikipedia

Among people born in 1504, Scipione Rebiba ranks 10. Before him are Francesco Primaticcio, George Boleyn, 2nd Viscount Rochford, Heinrich Bullinger, Beatrice of Portugal, Duchess of Savoy, John Dudley, 1st Duke of Northumberland, and Guru Angad. After him are Louis of Granada, Antun Vrančić, Charles Estienne, Stanislaus Hosius, and Dorothea of Denmark, Duchess of Prussia. Among people deceased in 1577, Scipione Rebiba ranks 9. Before him are Andrea Amati, Devlet I Giray, Anna of Saxony, Pedro Nunes, Maria of Portugal, Duchess of Viseu, and Infanta Maria of Guimarães. After him are Gjon Buzuku, Alvise I Mocenigo, and Rémy Belleau.