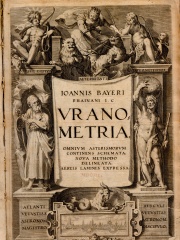 Johann Bayer (1572 – 7 March 1625) was a German lawyer and uranographer (celestial cartographer). He was born in Rain, Lower Bavaria, in 1572. At twenty, in 1592 he began his study of philosophy and law at the University of Ingolstadt, after which he moved to Augsburg to begin work as a lawyer, becoming legal adviser to the city council in 1612.Bayer had several interests outside his work, including archaeology and mathematics. Read more on Wikipedia

Johann Bayer was a German astronomer and cartographer who is most famous for the publication of Uranometria, a star atlas.

Among people born in 1572, Johann Bayer ranks 2. Before him is John Donne. After him are John Sigismund, Elector of Brandenburg, Ben Jonson, Cornelis Drebbel, Sigismund Báthory, Cyril Lucaris, Jane Frances de Chantal, Francis II, Duke of Lorraine, Izumo no Okuni, Maurice, Landgrave of Hesse-Kassel, and Marie Elisabeth of France. Among people deceased in 1625, Johann Bayer ranks 5. Before him are James VI and I, Sofonisba Anguissola, Maurice, Prince of Orange, and Jan Brueghel the Elder. After him are Simon Marius, Giambattista Marino, Christina of Holstein-Gottorp, Willem Schouten, Duchess Anna of Prussia, Mōri Terumoto, and Honoré d'Urfé.