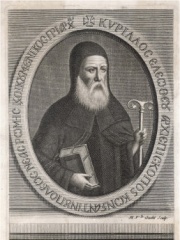 Cyril Lucaris or Loukaris (Greek: Κύριλλος Λούκαρις, 13 November 1572 – 27 June 1638), born Constantine Lucaris, was a Greek prelate and theologian, and a native of Candia, Crete (then under the Republic of Venice). He later became the Greek Patriarch of Alexandria as Cyril III and Ecumenical Patriarch of Constantinople as Cyril I. He has been said to have attempted a reform of the Eastern Orthodox Church along Calvinist Protestant lines. Attempts to bring Calvinism into the Orthodox Church were rejected, and Cyril's actions, motivations, and specific viewpoints remain a matter of debate among scholars. Read more on Wikipedia

Cyril Lucaris was a theologian, and he was most famous for his opposition to the teachings of the Eastern Orthodox Church.

Among religious figures, Cyril Lucaris ranks 817 out of 2,272. Before him are Mammes of Caesarea, Antipope Gregory VIII, Margaret of Hungary, Tarasios of Constantinople, Veronica Giuliani, and `Abdu'l-Bahá. After him are Bavo of Ghent, Wasil ibn Ata, Antoine Perrenot de Granvelle, Franz Jägerstätter, Antipas of Pergamum, and Priscillian.