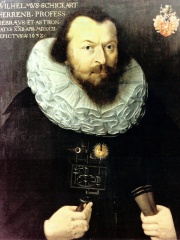 Wilhelm Schickard (22 April 1592 – 24 October 1635) was a German professor of Hebrew and astronomy who became famous in the second part of the 20th century after Franz Hammer, a biographer (along with Max Caspar) of Johannes Kepler, claimed that the drawings of a calculating clock, predating the public release of Pascal's calculator by twenty years, had been discovered in two unknown letters written by Schickard to Johannes Kepler in 1623 and 1624.Hammer asserted that because these letters had been lost for three hundred years, Blaise Pascal had been called and celebrated as the inventor of the mechanical calculator in error during all this time. After careful examination it was found that Schickard's drawings had been published at least once per century starting from 1718, that his machine was not complete and required additional wheels and springs and that it was designed around a single tooth carry mechanism that didn't work properly when used in calculating clocks.Schickard's machine was the first of several designs of direct entry calculating machines in the 17th century (including the designs of Blaise Pascal, Tito Burattini, Samuel Morland and René Grillet). The Schickard machine was particularly notable for its integration of an ingenious system of rotated Napier's rods for multiplication with a first known design for an adding machine, operated by rotating knobs for input, and with a register of rotated numbers showing in windows for output. Read more on Wikipedia

Wilhelm Schickard was a German mathematician and inventor. He is most famous for inventing the first mechanical calculator, which he called the Arithmometer.