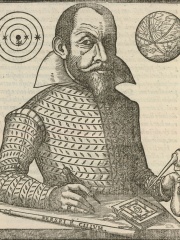 Simon Marius (latinized form of Simon Mayr; 10 January 1573 – 5 January 1625) was a German astronomer. He was born in Gunzenhausen, near Nuremberg, but spent most of his life in the city of Ansbach. Read more on Wikipedia

Simon Marius was a German astronomer who discovered the planet Uranus.

Among people born in 1573, Simon Marius ranks 4. Before him are William Laud, Maximilian I, Elector of Bavaria, and Anne of Austria, Queen of Poland. After him are Gabrielle d'Estrées, Christina of Holstein-Gottorp, Inigo Jones, Ambrosius Bosschaert, Robert Catesby, Sebastiaen Vrancx, Alexander, Duke of Schleswig-Holstein-Sonderburg, and Ukita Hideie. Among people deceased in 1625, Simon Marius ranks 6. Before him are James VI and I, Sofonisba Anguissola, Maurice, Prince of Orange, Jan Brueghel the Elder, and Johann Bayer. After him are Giambattista Marino, Christina of Holstein-Gottorp, Willem Schouten, Duchess Anna of Prussia, Mōri Terumoto, and Honoré d'Urfé.