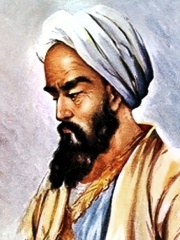 Abū Bakr Muḥammad ibn Yaḥyà ibn aṣ-Ṣā’igh at-Tūjībī ibn Bājja (Arabic: أبو بكر محمد بن يحيى بن الصائغ التجيبي بن باجة), best known by his Latinised name Avempace (; c. 1085 – 1138), was an Arab Andalusian polymath, whose writings include works regarding astronomy, physics, and music, as well as philosophy, medicine, botany, and poetry.He was the author of the Kitāb an-Nabāt ("The Book of Plants"), a popular work on botany, which defined the sex of plants. His philosophical theories influenced the work of Ibn Rushd (Averroes) and Albertus Magnus. Most of his writings and books were not completed (or well-organized) due to his early death. Read more on Wikipedia

Avempace is most famous for his philosophical work, The Incoherence of the Philosophers.

Page views of Avempaces by language

Among people born in 1080, Avempace ranks 3. Before him are Pope Eugene III and Suger. After him are Norbert of Xanten, Isidore the Laborer, Theresa, Countess of Portugal, Matilda of Scotland, Fakhr al-Mulk Radwan, Abu Hamid al-Gharnati, Margaret Fredkulla, Sanai, and Raymond du Puy. Among people deceased in 1138, Avempace ranks 1. After him are Bolesław III Wrymouth, Antipope Anacletus II, Irene Doukaina, Ar-Rashid, Moses ibn Ezra, and Vsevolod of Pskov.

Among ASTRONOMERS In Spain