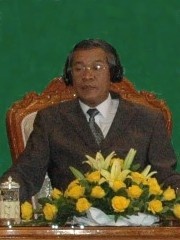 Hun Sen (; Khmer: ហ៊ុន សែន; born 5 August 1952) is a Cambodian politician who has served as the prime minister of Cambodia since 1985, the longest-serving head of government of Cambodia, and one of the longest-serving leaders in the world. He is also the president of the Cambodian People's Party (CPP) and a member of the National Assembly for Kandal. His full honorary title is Samdech Akka Moha Sena Padei Techo Hun Sen (Khmer: សម្តេចអគ្គមហាសេនាបតី តេជោ ហ៊ុន សែន; meaning "Lord Prime Minister, Supreme Military Commander Hun Sen").Born Hun Bunal, he changed his name to Hun Sen in 1972, two years after joining the Khmer Rouge as a soldier. Read more on Wikipedia

Hun Sen is most famous for being the Prime Minister of Cambodia.

Among politicians, Hun Sen ranks 2,650 out of 15,710. Before him are Manfred Gerlach, Maurice Quentin de La Tour, Karolos Papoulias, Charles III of Navarre, Frederick II, Duke of Swabia, and 3rd Dalai Lama. After him are Vasily Blokhin, Sargon I, Milton Obote, John Sherman, Paul Blobel, and Tetricus I.