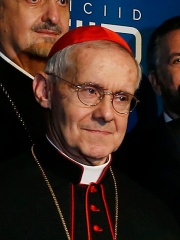 Jean-Louis Pierre Tauran (French: [ʒɑ̃lwi toʁɑ̃]; 5 April 1943 – 5 July 2018) was a French cardinal of the Catholic Church. When he died, he had been the president of the Pontifical Council for Interreligious Dialogue since 2007 and Camerlengo of the Holy Roman Church since the end of 2014. He was made a cardinal in 2003 and was the Cardinal Protodeacon from 2011 to 2014. Read more on Wikipedia

Jean-Louis Tauran is most famous for being the president of the European Parliament.

Among religious figures, Jean-Louis Tauran ranks 774 out of 2,238. Before him are Nahor, son of Serug, Juliana of Nicomedia, Catherine of Vadstena, Odile of Alsace, Francisco Álvarez Martínez, and `Abdu'l-Bahá. After him are Carlos Filipe Ximenes Belo, Maron, Frederick Fleet, Archduke Rudolf of Austria, Stanislaus of Szczepanów, and Nathan Söderblom.