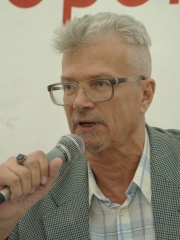 Eduard Limonov (Russian: Эдуард Лимонов, real name Eduard Veniaminovich Savenko, Russian: Эдуард Вениаминович Савенко; 22 February 1943 – 17 March 2020) was a Russian writer, poet, publicist, and political dissident. He emigrated from the USSR in 1974 and earned the fame of a scandalous writer abroad, in particular, due to obscene language and pornographic scenes in his first novel It's Me, Eddie. In 1991, he returned to Russia and soon founded the controversial National Bolshevik Party that was banned in the country in 2007 (it was superseded by The Other Russia party). Read more on Wikipedia

Since 2007, the English Wikipedia page of Eduard Limonov has received more than 331,710 page views. His biography is available in 34 different languages on Wikipedia making him the 4,224th most popular politician.

Among politicians, Eduard Limonov ranks 4,201 out of 14,801. Before him are Al-Hakim I, Prusias I of Bithynia, Wu Ding, Princess Marie Isabelle of Orléans, Radagaisus, and Michael Hainisch. After him are Eleanor of Alburquerque, Paolo Gentiloni, Maeda Toshiie, Muzio Attendolo Sforza, Meir Kahane, and Al-Muhtadi.