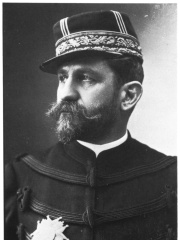 Georges Ernest Jean-Marie Boulanger (29 April 1837 – 30 September 1891), nicknamed Général Revanche ("General Revenge"), was a French general and politician. An enormously popular public figure during the second decade of the Third Republic, he won multiple elections. At the zenith of his popularity in January 1889, he was feared to be powerful enough to establish himself as dictator. Read more on Wikipedia

Georges Ernest Boulanger was a French general and politician. He served as Minister of War in 1886 and then as Prime Minister from 1887 to 1888. He is most famous for his service in the Franco-Prussian War, where he was a general.

Among politicians, Georges Ernest Boulanger ranks 3,250 out of 15,710. Before him are Candaules, Michał Korybut Wiśniowiecki, James Macpherson, Philip III of Navarre, Lluís Llach, and Charles Emmanuel II, Duke of Savoy. After him are Richard I of Normandy, Susilo Bambang Yudhoyono, Halsten Stenkilsson, Sundiata Keita, Antigonus II Mattathias, and Thesh.