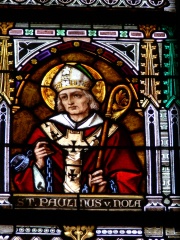 Paulinus of Nola (; Latin: Paulinus Nolanus; also Anglicized as Pauline of Nola; c. 354 – 22 June 431) born Pontius Meropius Anicius Paulinus, was a Roman poet, writer, and senator who attained the ranks of suffect consul (c. 377) and governor of Campania (c. 380–81) but—following the assassination of the emperor Gratian and under the influence of his Spanish wife Therasia of Nola—abandoned his career, was baptized as a Christian, and probably after Therasia's death became bishop of Nola in Campania. While there, he wrote poems in honor of his predecessor St Felix and corresponded with other Christian leaders throughout the empire. He is credited with the introduction of bells to Christian worship and helped resolve the disputed election of Pope Boniface I. His renunciation of his wealth and station in favor of an ascetic and philanthropic life was held up as an example by many of his contemporaries—including SS Augustine, Jerome, Martin, and Ambrose—and he was subsequently venerated as a saint. Read more on Wikipedia

Paulinus of Nola was a Latin poet, Christian bishop, and later saint. He is most famous for his poetry, which is often about the beauty of nature and the glory of God.

Page views of Paulinus of Nolas by language