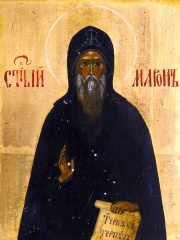 Maron, also called Maroun or Maro (Syriac: ܡܪܘܢ, Mārūn; Arabic: مارون; Latin: Maron; Greek: Μάρων), was a 4th-century Syrian Syriac Christian hermit monk in the Taurus Mountains whose followers, after his death, founded a religious Christian movement that became known as the Syriac Maronite Church, in full communion with the Holy See and the Catholic Church. The religious community which grew from this movement are the modern Maronites. Saint Maron is often portrayed in a black monastic habit with a hanging stole, accompanied by a long crosier staffed by a globe surmounted with a cross. Read more on Wikipedia

Maron is most famous for his podcast, WTF with Marc Maron. The podcast is a show where Marc interviews comedians and celebrities about their lives and careers.

Page views of Marons by language

Among religious figures, Maron ranks 776 out of 2,238. Before him are Catherine of Vadstena, Odile of Alsace, Francisco Álvarez Martínez, `Abdu'l-Bahá, Jean-Louis Tauran, and Carlos Filipe Ximenes Belo. After him are Frederick Fleet, Archduke Rudolf of Austria, Stanislaus of Szczepanów, Nathan Söderblom, Hemma of Gurk, and Giovanni Battista Re.

Among people born in 301, Maron ranks 2. Before him is Aelia Eudoxia. After him are Rutilius Taurus Aemilianus Palladius, Helena, Anatolius of Constantinople, Olympiodorus of Thebes, Saint Aurelius, and Saint Telemachus. Among people deceased in 410, Maron ranks 2. Before him is Alaric I. After him are Emperor Hanzei, Saint Marcella, and Gaudentius of Brescia.