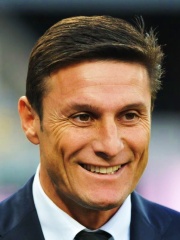 Javier Adelmar Zanetti (Spanish pronunciation: [xaˈβjeɾ saˈneti]; born 10 August 1973) is an Argentine former professional footballer. He is regarded as one of the best players of his generation, and is especially well known for his role in Inter Milan's treble-winning 2009–10 season. Zanetti was known for his versatility as well as his adeptness on both the left and right wing, having played as a full-back on both flanks in addition to being a midfielder. Read more on Wikipedia

Javier Zanetti is a retired Argentine footballer who played as a left-back. He spent his entire professional career at Inter Milan, where he won 16 trophies, including five Serie A titles and the UEFA Champions League. Zanetti is the most decorated player in the history of Inter Milan and the most capped player in the history of the Italian national team. He is widely regarded as one of the best defenders of his generation.