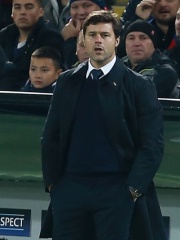 Mauricio Roberto Pochettino Trossero (Spanish pronunciation: [mawˈɾisjo potʃeˈtino]; born 2 March 1972) is an Argentine professional football manager and former player, who was most recently the manager of Premier League club Tottenham Hotspur. As a centre-back, he spent 17 years as a professional player, ten of which were in La Liga with Espanyol where he scored 13 goals in 275 games and won two Copa del Rey trophies. He also played in France for two clubs, Paris Saint-Germain and Bordeaux, having started his career with Newell's Old Boys. Read more on Wikipedia

Since 2007, the English Wikipedia page of Mauricio Pochettino has received more than 4,432,230 page views. His biography is available in 43 different languages on Wikipedia making him the 140th most popular soccer player.