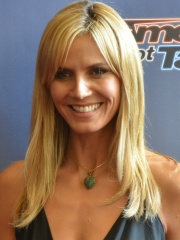 Heidi Klum (German pronunciation: [ˈhaɪ̯diː ˈklʊm], born 1 June 1973) is a German-American model, television host, producer, and businesswoman. She appeared on the cover of the Sports Illustrated Swimsuit Issue in 1998 and was the first German model to become a Victoria's Secret Angel. Following a successful modeling career, Klum became the host and a judge of Germany's Next Topmodel and the reality show Project Runway, which earned her an Emmy nomination in 2008 and a win in 2013 for Outstanding Host for a Reality or Reality-Competition Program (shared with co-host Tim Gunn). Read more on Wikipedia

Among MODELS In Germany