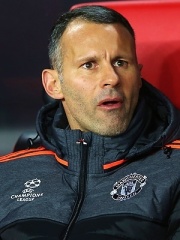 Ryan Joseph Giggs (born Wilson; 29 November 1973) is a Welsh football coach and former player. He is the manager of the Wales national team and a co-owner of Salford City. Giggs played his entire professional career for Manchester United and briefly served as the club's interim manager after the sacking of David Moyes in April 2014. Giggs is regarded as one of the greatest players of his generation.The son of rugby union and Wales international rugby league footballer Danny Wilson, Giggs was born in Cardiff but moved to Manchester at the age of six when his father joined Swinton RLFC. Read more on Wikipedia