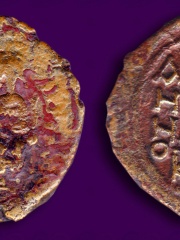 Aelia Sophia (Medieval Greek: Σοφία) (c. 530 – c./aft. 601) was the Byzantine empress as the wife of Emperor Justin II. She was also ruler in her capacity as regent during the incapacity of her spouse from 573 until 578, though she was never a monarch. Read more on Wikipedia

Sophia is the first humanoid robot to be granted citizenship in Saudi Arabia. She is designed to be a companion and helper for the elderly.

Page views of Sophias by language

Among politicians, Sophia ranks 4,525 out of 15,577. Before her are Konstantinos Mitsotakis, Ivaylo of Bulgaria, Enmebaragesi, Michal Kováč, Juan, Count of Montizón, and Bernard of Italy. After her are Alar Karis, Princess Hélène of Orléans, Infanta Pilar, Duchess of Badajoz, Isabel Neville, Duchess of Clarence, Joscelin I, Count of Edessa, and Josip Juraj Strossmayer.

Among people born in 530, Sophia ranks 4. Before her are Pope Sabinian, Alboin, and Venantius Fortunatus. After her are Waldrada and Goiswintha. Among people deceased in 600, Sophia ranks 4. Before her are Jordanes, Abraha, and Abd Manaf ibn Qusai. After her are Stephanus of Byzantium, Qasim ibn Muhammad, Priscian, Leander of Seville, Hrólfr Kraki, Bharavi, Eutocius of Ascalon, and John the Lydian.