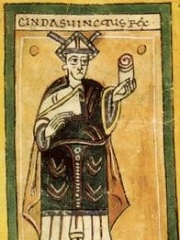 Chindasuinth (also spelled Chindaswinth, Chindaswind, Chindasuinto, Chindasvindo, or Khindaswinth (Latin: Chintasvintus, Cindasvintus; c. 563 – 30 September 653) was Visigothic King of Hispania, from 642 until his death in 653. He succeeded Tulga, from whom he took the throne in a coup. Read more on Wikipedia

Chindasuinth was most famous for the reforms he instituted in his reign. He was the first Visigoth king to mint coins, which were used to pay his soldiers. He also introduced a new law code that was more lenient than previous Visigoth law codes.

Page views of Chindasuinths by language

Among politicians, Chindasuinth ranks 4,516 out of 15,577. Before him are Étienne Marcel, Kurmanbek Bakiyev, François Fillon, Baldwin V, Count of Hainaut, George Papandreou, and Teuta. After him are Bakir Izetbegović, Georgy Pyatakov, Konstantinos Mitsotakis, Ivaylo of Bulgaria, Enmebaragesi, and Michal Kováč.