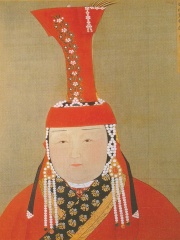 Page views of Chabis by language

Among companions, Chabi ranks 577 out of 673. Before her are Toda of Pamplona, Maria Caterina Brignole, Eusebia, Eleanor of Castile, Elizabeth of Denmark, Electress of Brandenburg, and Princess Luise Dorothea of Prussia. After her are Anicia Juliana, Helvig of Schleswig, Estrid Svendsdatter, Glaphyra, Archduchess Isabella of Austria, and Princess Augusta of Prussia.

Among people born in 1227, Chabi ranks 5. Before her are Pope Nicholas IV, Elisabeth of Bavaria, Queen of Germany, Rostislav Mikhailovich, and Gurju Khatun. After her is John Peckham. Among people deceased in 1281, Chabi ranks 6. Before her are Ertuğrul, Ivaylo of Bulgaria, Gertrude of Hohenberg, Anna of Hungary, and Henry V, Count of Luxembourg. After her are Władysław Opolski and John II, Margrave of Brandenburg-Stendal.