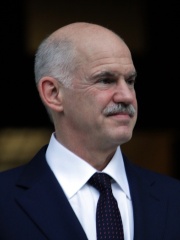 George Andreas Papandreou (Greek: Γεώργιος Ανδρέας Παπανδρέου, pronounced [ʝeˈorʝios papanˈðreu], shortened to Giorgos (Γιώργος) [ˈʝorɣos] to distinguish him from his grandfather; born 16 June 1952) is a Greek politician who served as Prime Minister of Greece from 2009 to 2011. He is currently serving as an MP for Movement for Change. Belonging to a political dynasty of long standing, he served under his father, then-prime minister Andreas Papandreou as Minister for National Education and Religious Affairs (1988–1989 and 1994–1996) and Minister for Foreign Affairs from 1999 to 2004. Read more on Wikipedia

Among politicians, George Papandreou ranks 4,348 out of 15,710. Before him are Zeng Guofan, Penda of Mercia, Ata-Malik Juvayni, Axayacatl, Princess Marie Isabelle of Orléans, and Pithana. After him are Nobuyuki Abe, Frederick the Simple, Gaetano Bresci, Charles I, Landgrave of Hesse-Kassel, Boleslaus II, Duke of Bohemia, and Georgy Pyatakov.