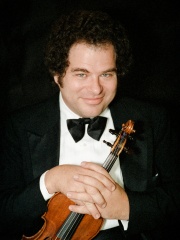 Itzhak Perlman (Hebrew: יצחק פרלמן‎; born 31 August 1945) is an Israeli-American violinist, conductor, and music teacher. Over the course of his career Perlman has performed worldwide, and throughout the United States, in venues that have included a State Dinner at the White House honoring Queen Elizabeth II, and at the Presidential Inauguration of President Obama. He has conducted the Detroit Symphony Orchestra, the Philadelphia Orchestra, and the Westchester Philharmonic. Read more on Wikipedia

Itzhak Perlman is most famous for his violin playing. He was born in Tel Aviv, Israel, on January 27, 1945. He began playing the violin at the age of four and went on to study at the Juilliard School in New York City. He has performed with many famous orchestras, including the New York Philharmonic and the Royal Philharmonic Orchestra.

Among MUSICIANS In Israel