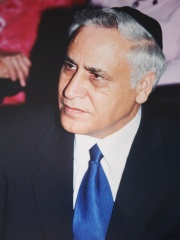 Moshe Katsav (Hebrew: מֹשֶׁה קַצָּב; born 5 December 1945) is an Israeli former politician  who was the eighth President of Israel from 2000 to 2007. He was also a leading Likud member of the Israeli Knesset and a minister in its cabinet. Read more on Wikipedia

Moshe Katsav was the president of Israel from 2000 to 2007. He was convicted of rape and other sexual offenses in 2007 and sentenced to seven years in prison.

Among politicians, Moshe Katsav ranks 1,920 out of 15,710. Before him are Josep Borrell, Svatopluk I of Moravia, Robert Dudley, 1st Earl of Leicester, Stamford Raffles, Halimah bint Abi Dhuayb, and Amenmesse. After him are Princess Joséphine Charlotte of Belgium, John I of Castile, John, Prince of Asturias, Wang Jingwei, Mohamed Naguib, and Lothair II.