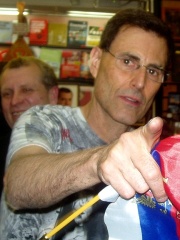 Uri Geller ( OOR-ee GHEL-ər; Hebrew: אורי גלר; born 20 December 1946) is an Israeli-British illusionist, magician, television personality, and self-proclaimed psychic. He is known for his trademark television performances of spoon bending and other illusions. Geller uses conjuring tricks to simulate the effects of psychokinesis and telepathy. Read more on Wikipedia

Uri Geller is most famous for his ability to bend spoons and forks with his mind.

Among magicians, Uri Geller ranks 3 out of 11. Before him are Harry Houdini and David Copperfield. After him are Jean Eugène Robert-Houdin, James Randi, David Blaine, Criss Angel, Ricky Jay, Dynamo, Derren Brown, and Penn Jillette.

Among MAGICIANS In Israel