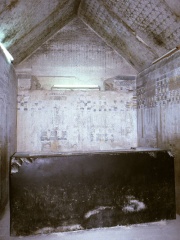 Unas or Wenis, also spelled Unis (Ancient Egyptian: wnjs, hellenized form Oenas or Onnos), was a pharaoh, the ninth and last ruler of the Fifth Dynasty of Egypt during the Old Kingdom. Unas reigned for 15 to 30 years in the mid-24th century BC (circa 2345–2315 BC), succeeding Djedkare Isesi, who might have been his father. Little is known of Unas' activities during his reign, which was a time of economic decline. Read more on Wikipedia

Unas was the last king of the fifth dynasty and is most famous for his pyramid, which was the first to have an underground burial chamber.

Page views of Unas by language

Among politicians, Unas ranks 2,404 out of 15,577. Before him are Isabella II of Jerusalem, Ali al-Sistani, Marie José of Belgium, Siptah, Duchess Elisabeth of Württemberg, and Empress Genmei. After him are Infante Carlos, Count of Molina, Grigory Orlov, Lyudmila Putina, Sancho III of Pamplona, Alboin, and Maria Anna of Bavaria.