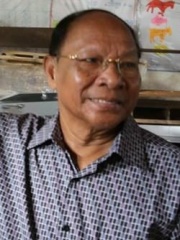 Heng Samrin (Khmer: ហេង សំរិន; born 25 May 1934) is a Cambodian politician who serves as the President of the National Assembly of Cambodia. Between 1979 and 1992, he was the de facto leader of the Hanoi-backed People's Republic of Kampuchea (1979–1989) and State of Cambodia (1989–1992) and General Secretary of the Kampuchean People's Revolutionary Party from 1981 to 1991. He has been a member of Parliament since 1993. Read more on Wikipedia

Heng Samrin is most famous for being the leader of the Kampuchean People's Revolutionary Party and the Chairman of the Council of State of the Democratic Kampuchea.

Among politicians, Heng Samrin ranks 3,797 out of 15,710. Before him are Devlet I Giray, Infanta Maria Josepha of Portugal, Euphronios, Louise Marie Thérèse of Artois, H. H. Asquith, and René II, Duke of Lorraine. After him are Peter Minuit, Intef III, Andriscus, Mengu-Timur, Al-Muazzam Turanshah, and Peter von Biron.