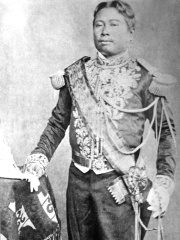 Norodom (Khmer: នរោត្តម [nɔroːtˈɗɑm]; born Ang Voddey (Khmer: អង្គវតី [ʔɑŋ ʋɔˈtəj]); 3 February 1834 – 24 April 1904), was the King of Cambodia from 1860 to his death in 1904. He was the eldest son of King Ang Duong and was a half-brother of Prince Si Votha and King Sisowath. He was elected to the throne in 1860 but would not be crowned until 1864 due to the fact that Siam held the royal regalia (the royal crown and other artefacts). Read more on Wikipedia

Norodom of Cambodia was a Cambodian King who ruled from 1904 to 1941. He was the son of King Ang Duong and Queen Sisowath Kossamak.

Page views of Norodom of Cambodias by language

Among politicians, Norodom of Cambodia ranks 3,690 out of 15,710. Before him are Heracles of Macedon, Çandarlı Halil Pasha the Younger, Gelon, Hissène Habré, Magnus, Duke of Holstein, and Hjalmar Siilasvuo. After him are Latife Uşşaki, Frederick IV, Duke of Holstein-Gottorp, Hetepheres I, Adil Abdul-Mahdi, Eric X of Sweden, and Ptolemy of Mauretania.