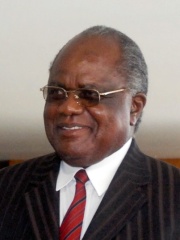 Hifikepunye Lucas Pohamba (born 18 August 1936) is a Namibian politician who served as the second President of Namibia from 21 March 2005 to 21 March 2015. He won the 2004 election overwhelmingly as the candidate of SWAPO, the ruling party, and was reelected in 2009. Pohamba was the president of SWAPO from 2007 until his retirement in 2015. Read more on Wikipedia

Among politicians, Hifikepunye Pohamba ranks 7,073 out of 15,710. Before him are Osorkon the Elder, Henry I, Margrave of Austria, Théophile Delcassé, Nguyễn Hữu Thọ, Thoros of Edessa, and John II, Duke of Brabant. After him are Bernardino Rivadavia, Oleg Gordievsky, George Hamilton-Gordon, 4th Earl of Aberdeen, Amenemhet VI, Cornelis Cort, and Quintus Fulvius Flaccus.

Among POLITICIANS In Namibia