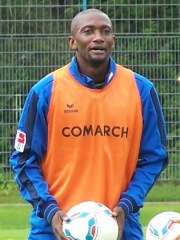 Collin Benjamin (born 3 August 1978) is a Namibian retired football midfielder. He spent mostly of his professional career with Hamburger SV while representing the Namibia national football team at international level.He represented Namibia at the 2008 African Cup of Nations and earned 32 caps and captained the team for several years. Read more on Wikipedia

Since 2007, the English Wikipedia page of Collin Benjamin has received more than 24,426 page views. His biography is available in 18 different languages on Wikipedia making him the 6,654th most popular soccer player.