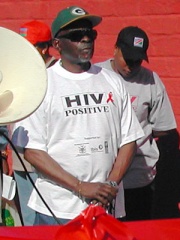 Nahas Gideon Angula (born 22 August 1943) is a Namibian politician who served as the third Prime Minister of Namibia from 21 March 2005 to 4 December 2012. He was succeeded by Hage Geingob in a cabinet reshuffle after the 2012 SWAPO congress. He subsequently served as Minister of Defence from 2012 to 2015. Read more on Wikipedia

Since 2007, the English Wikipedia page of Nahas Angula has received more than 29,810 page views. His biography is available in 26 different languages on Wikipedia making him the 10,900th most popular politician.