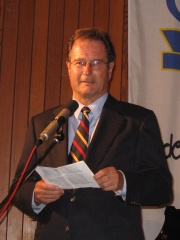 Klaus Kinkel (17 December 1936 – 4 March 2019) was a German statesman, civil servant, diplomat and lawyer who served as the minister of Foreign affairs (1992–1998) and the vice-chancellor of Germany (1993–1998) in the government of Helmut Kohl. Kinkel was a career civil servant and a longtime aide to Hans-Dietrich Genscher, and served as his personal secretary in the Federal Ministry of the Interior from 1970 and in senior roles in the Foreign Office from 1974. He was President of Federal Intelligence Service from 1979 to 1982 and a state secretary in the Federal Ministry of Justice from 1982 to 1991. Read more on Wikipedia

Among politicians, Klaus Kinkel ranks 7,310 out of 15,710. Before him are Bamir Topi, Qaitbay, Ivan Fyodorov, Grand Duchess Elizabeth Mikhailovna of Russia, Jane Avril, and Cuauhtémoc Cárdenas. After him are Vladislav Ardzinba, Hermann I, Landgrave of Thuringia, Quietus, Presian I of Bulgaria, Henry XIV, Duke of Bavaria, and Marcus Claudius Marcellus.