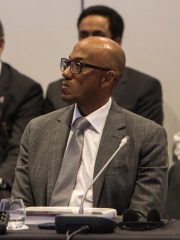 Frank "Frankie" Fredericks (born 2 October 1967) is a former track and field athlete from Namibia. Running in the 100 metres and 200 metres, he won four silver medals at the Olympic Games (two in 1992 and two in 1996), making him Namibia's so far only Olympic medalist. He also won gold medals at the World Championships, World Indoor Championships, All-Africa Games and Commonwealth Games. Read more on Wikipedia

Since 2007, the English Wikipedia page of Frankie Fredericks has received more than 225,972 page views. His biography is available in 31 different languages on Wikipedia making him the 528th most popular athlete.