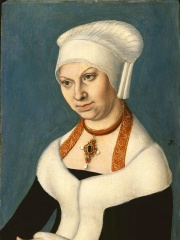 Barbara Jagiellon (15 July 1478 – 15 February 1534) was a Polish princess member of the Jagiellonian dynasty and by marriage Duchess of Saxony. Born in Sandomierz, she was the sixth daughter of King Casimir IV of Poland and Archduchess Elisabeth of Austria. Read more on Wikipedia

Among politicians, Barbara Jagiellon ranks 6,781 out of 15,710. Before her are Frederick V, Duke of Swabia, Ariadne, Efim Geller, Richeza of Lotharingia, Frederick Casimir Kettler, and Frederick William, Prince of Nassau-Weilburg. After her are Tetricus II, Pentawer, John Tristan, Count of Valois, Arioald, Chungjeong of Goryeo, and John Lewis.

Among people born in 1478, Barbara Jagiellon ranks 12. Before her are Philip I of Castile, Baldassare Castiglione, John, Prince of Asturias, Jan Gossaert, Pánfilo de Narváez, and Surdas. After her are Hatuey, Gian Giorgio Trissino, Louis V, Elector Palatine, and Wolfgang Capito. Among people deceased in 1534, Barbara Jagiellon ranks 10. Before her are Alfonso I d'Este, Duke of Ferrara, Chaitanya Mahaprabhu, Thomas Cajetan, Marcantonio Raimondi, Philippe Villiers de L'Isle-Adam, and Otto Brunfels. After her are Antonio da Sangallo the Elder, Johannes Aventinus, and Beatriz Galindo.