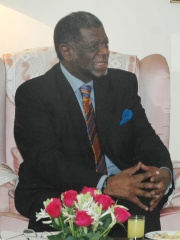 Theo-Ben Gurirab (23 January 1938 – 14 July 2018) was a Namibian politician who served in various senior government positions. He served as the second Prime Minister of Namibia from 28 August 2002 to 20 March 2005, following the demotion and subsequent resignation of Hage Geingob. Previously he was the country's first Minister of Foreign Affairs from 1990 to 2002, and was President of the United Nations General Assembly from 1999 to 2000. Read more on Wikipedia

Since 2007, the English Wikipedia page of Theo-Ben Gurirab has received more than 77,614 page views. His biography is available in 18 different languages on Wikipedia making him the 11,069th most popular politician.