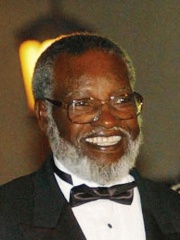 Samuel Shafiishuna Daniel Nujoma, (; born 12 May 1929) is a Namibian revolutionary, anti-apartheid activist and politician who served three terms as the first President of Namibia, from 1990 to 2005. Nujoma was a founding member and the first president of the South West Africa People's Organization (SWAPO) in 1960. Prior to 1960, SWAPO was known as the Ovambo People's Organisation (OPO). Read more on Wikipedia

Since 2007, the English Wikipedia page of Sam Nujoma has received more than 237,312 page views. His biography is available in 44 different languages on Wikipedia making him the 4,287th most popular politician.

Among POLITICIANS, Sam Nujoma ranks 4,287 out of 14,801. Before him are Maria of Alania, Joaquim Chissano, Countess Palatine Dorothea Sophie of Neuburg, Akhmad Kadyrov, Ordoño II of León, and Emperor Go-Saga. After him are Franz Seldte, Alparslan Türkeş, Quintus Caecilius Metellus Pius Scipio Nasica, Mesud I, Pepin the Hunchback, and John II, Duke of Schleswig-Holstein-Sonderburg.