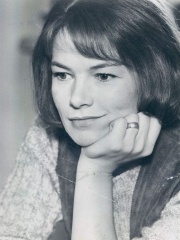 Glenda May Jackson (born 9 May 1936) is an English actress and politician. She has won the Academy Award for Best Actress twice, receiving the first for her role as Gudrun Brangwen in the romantic drama film Women in Love (1970) and the second for her role as Vickie Allessio in the romantic comedy film A Touch of Class (1973). She also received praise for her performances as Alex Greville in the drama film Sunday Bloody Sunday (1971) and Elizabeth I in the BBC television serial Elizabeth R (1971), winning two Primetime Emmy Awards for the latter. Read more on Wikipedia

Among politicians, Glenda Jackson ranks 6,656 out of 15,710. Before her are Chadae of Goguryeo, Neferneferure, Phraates III, Prince Wilhelm of Prussia, Ferenc Fricsay, and Damat Ibrahim Pasha. After her are Hinrich Lohse, Bertha of Sulzbach, Duchess Augusta of Brunswick-Wolfenbüttel, Michael I Apafi, Ashur-dan II, and Michael Morris, 3rd Baron Killanin.