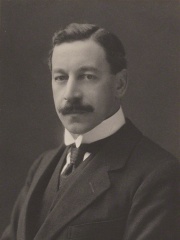 Herbert Louis Samuel, 1st Viscount Samuel, (6 November 1870 – 5 February 1963) was a British Liberal politician who was the party leader from 1931 to 1935. He was the first nominally-practising Jew to serve as a Cabinet minister and to become the leader of a major British political party. Samuel had promoted Zionism within the British Cabinet, beginning with his 1915 memorandum entitled The Future of Palestine. Read more on Wikipedia

Among politicians, Herbert Samuel, 1st Viscount Samuel ranks 6,914 out of 15,577. Before him are Géraud Duroc, Duchess Augusta of Brunswick-Wolfenbüttel, Kunigunde of Hohenstaufen, Francisco Serrano, 1st Duke of la Torre, Jovinus, and Louise Bénédicte de Bourbon. After him are Hendrik Verwoerd, Chōsokabe Motochika, Princess Victoria of Saxe-Coburg and Gotha, Igor II of Kiev, Ivan Susanin, and Inge II of Norway.