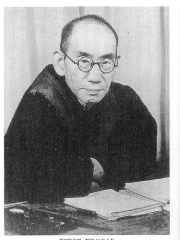 Kitarō Nishida (西田 幾多郎, Nishida Kitarō, May 19, 1870 – June 7, 1945) was a prominent Japanese philosopher, founder of what has been called the Kyoto School of philosophy. He graduated from the University of Tokyo during the Meiji period in 1894 with a degree in philosophy. He was named professor of the Fourth Higher School in Ishikawa Prefecture in 1899 and later became professor of philosophy at Kyoto University. Read more on Wikipedia

Since 2007, the English Wikipedia page of Kitaro Nishida has received more than 131,055 page views. His biography is available in 18 different languages on Wikipedia making him the 679th most popular philosopher.

Among philosophers, Kitaro Nishida ranks 677 out of 1,005. Before him are Georges Politzer, Johannes Sturm, Calcidius, Joseph Albo, Abhinavagupta, and Polemon. After him are Yang Xiong, James Mark Baldwin, Jakob Lorber, Hermann von Keyserling, Albert of Saxony, and Nikephoros Blemmydes.