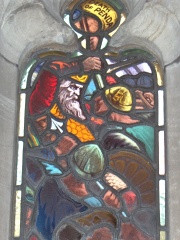 Penda (died 15 November 655) was a 7th-century King of Mercia, the Anglo-Saxon kingdom in what is today the Midlands. A pagan at a time when Christianity was taking hold in many of the Anglo-Saxon kingdoms, Penda took over the Severn Valley in 628 following the Battle of Cirencester before participating in the defeat of the powerful Northumbrian king Edwin at the Battle of Hatfield Chase in 633.Nine years later, he defeated and killed Edwin's eventual successor, Oswald, at the Battle of Maserfield; from this point he was probably the most powerful of the Anglo-Saxon rulers of the time, laying the foundations for the Mercian Supremacy over the Anglo-Saxon Heptarchy. He repeatedly defeated the East Angles and drove Cenwalh the king of Wessex into exile for three years. Read more on Wikipedia

Page views of Penda of Mercias by language

Among politicians, Penda of Mercia ranks 4,343 out of 15,710. Before him are Maximilian, Hereditary Prince of Saxony, Archduke Rainer Joseph of Austria, Albert I, Duke of Bavaria, Dardanus, Lee Hsien Loong, and Zeng Guofan. After him are Ata-Malik Juvayni, Axayacatl, Princess Marie Isabelle of Orléans, Pithana, George Papandreou, and Nobuyuki Abe.