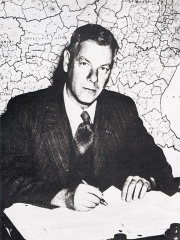 Hendrik Frensch Verwoerd ([fərˈvuːrt]; 8 September 1901 – 6 September 1966) was a South African politician, a scholar of applied psychology and sociology, and chief editor of Die Transvaler newspaper. He is commonly regarded as the architect of Apartheid. Verwoerd played a significant role in socially engineering apartheid, the country's system of institutionalized racial segregation and white supremacy, and implementing its policies as Minister of Native Affairs (1950–1958) and then as prime minister (1958–1966). Read more on Wikipedia

Among politicians, Hendrik Verwoerd ranks 6,915 out of 15,577. Before him are Duchess Augusta of Brunswick-Wolfenbüttel, Kunigunde of Hohenstaufen, Francisco Serrano, 1st Duke of la Torre, Jovinus, Louise Bénédicte de Bourbon, and Herbert Samuel, 1st Viscount Samuel. After him are Chōsokabe Motochika, Princess Victoria of Saxe-Coburg and Gotha, Igor II of Kiev, Ivan Susanin, Inge II of Norway, and Tiberius Coruncanius.